Are you searching for an Evanston Truck Accident Attorney? In 2014, a UPS truck turned a corner at Central Street and Ashland Avenue, striking a 30-year-old woman who was walking in the crosswalk and dragging her several feet beneath the truck before coming to a stop. 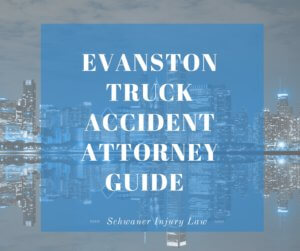 The woman wasn’t killed, but suffered critical injuries in the incident, likely the result of inattentive driving.

Evanston is located just 12 miles north of Chicago and is home to Northwestern University, so the city is no stranger to heavy traffic. With a population of 75,000, it is also home to numerous businesses that rely on tractor-trailers and delivery trucks to keep them operating.

While most drivers on the road don’t recognize or realize the importance of being careful around tractor-trailers, a fully loaded semi can weigh between 80,000 to 125,000 pounds, compared to the 4,000 pounds of a small passenger vehicle. In a crash, passenger vehicles always suffer the most damage, no matter who was at fault in the accident.

While statistics show that careless moves by passenger vehicles are often responsible for accidents involving tractor-trailers, there are also numerous mistakes semis drivers make on the road, putting passenger vehicle drivers at a real risk of injury or death.

As in the accident with the UPS driver and the pedestrian, inattentive driving can be the most dangerous reasons for tractor-trailer accidents, especially in a busy city like Evanston, where students are rushing to class and employees are headed to work at one of the more than 300 businesses in downtown Evanston, including the university.

Because of college traffic and traffic from nearby Chicago, at Evanston traffic can be heavy, and when roads are shared with tractor-trailers, the risks on the road become exponentially higher.

Inattentive driving, which was the likely cause of the accident between the UPS driver and the pedestrian, is a dangerous on the roadways because drivers who have been on the road for long periods of time can be easily distracted by a variety of things.

In addition to food and beverages, some common distractions include GPS systems, used when tractor-trailer or delivery drivers are traveling on unfamiliar routes, cell phones and other electronics, all of which can cause a driver to take his or her eyes off the road for a second, which is long enough to cause an accident.

Other common causes of truck-related accidents include:

In 1997, a teen that was about to graduate from an Evanston high school was in an accident that left him dead and the driver of the Ford Explorer he was a passenger in critically injured after a wheel came off of a truck and flew through the vehicle’s windshield.

The driver of the Explorer, from Chicago, was traveling on Edens Expressway when the accident, sparked when the Wisconsin-based driver of the tractor-trailer grazed a median and lost two wheels, occurred.

The semi driver was cited for driving a truck with faulty equipment.

In addition to Edens Parkway, some of the most dangerous Evanston-area roadways, based on recent truck-related accidents and other data, include:

If you were involved in a truck accident in Evanston, Illinois, the most important step you can take is to contact an experienced truck accident attorney to help guide you through the complex process of being compensated for your injuries.

An experienced Evanston attorney will understand the potential pitfalls of filing a lawsuit against a truck driver and/or his or her trucking company, and will be prepared to gather the evidence needed to take your case to trial should negotiations with insurance companies not end favorably.

On the other hand, if you are a truck driver who was injured badly in a crash in Evanston, we can help you recover the maximum settlement for your injury.

Your consultation with us is free, and you won’t be charged for anything until your case is settled favorably.