Located less than 40 miles from Chicago along the Fox River, Elgin is one of the largest cities in Illinois, with a population of about 110,000 people, which already puts it at a higher risk of accidents, since population organically generates added traffic. 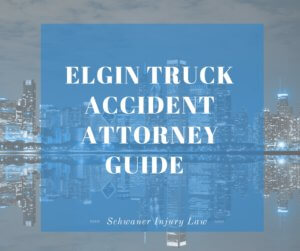 But because Interstate 90, the longest and one of the most heavily trafficked interstates in the country borders the city, there is more traffic in the area, making it a prime location for not only tractor-trailer traffic, but also truck-related accidents.

Whether you’re going to the Grand Victoria Casino Elgin on South Grove Avenue, a tourist destination that draws four million visitors a year, or are headed to classes at Elgin Community College on Spartan Drive, truck accidents are a possibility, and requires proactive driving.

In 2016, a 25-year-old motorcycle driver was killed just south of Elgin when a semi made a left turn in front of him, cutting the motorcyclist off.

A year later, his family filed a wrongful death suit against the driver, who was ticketed for making a wrongful left turn, as well as his company. The suit said the driver violated state law by failing to yield, failing to maintain control of his vehicle to avoid a collision, inattentive driving and driving too fast for conditions.

According to the driver, he thought the motorcyclist had flashed his lights at him, giving him permission to make the turn, until he saw the motorcycle skid out of control.

Distracted driving is one of the most common causes of truck accident, especially if drivers are traveling on unfamiliar roads and are turning to their GPS system for guidance.

A distracted driver may not notice oncoming traffic because he or she is talking on a cell phone or texting, changing the radio station or multi-tasking by eating behind the wheel.

Other common truck-related accidents are caused by:

Potential injuries from truck accidents include back and neck problems, broken bones and internal injuries, but truck-passenger vehicles are also at a high risk of fatalities, because tractor-trailers are so much bigger than passenger vehicles. (Semis can weigh as much as 125,000 pounds when fully loaded with freight, compared to a passenger car, which weighs about 4,000 pounds.)

For drivers who have been stuck in Chicago traffic, interstate speed limits shift from 55 to 65, giving drivers the ability to boost their speed to make up for any delays they experienced while traveling through the city.

Certainly I-90 is one of the most dangerous roadways for truck-related accidents, but it is not the only area where truck accidents occur.

Some of the most dangerous Elgin-area roadways, based on recent statistics, include:

If you are sharing the road with a semi, remember to drive defensively so that you are less likely to need an experienced attorney to handle your case in the event of an accident. If you are looking to file a lawsuit or get representation for your or a loved ones injury, get in touch with our team.

What Our Customers Are Saying

I couldn’t have asked for a better injury lawyer. David Schwaner was wonderful to work with. He’s straightforward and gets the job done, all the while being most compassionate. I wish I could choose 6s. I’d recommend Schwaner Injury Law above all.