When a truck makes an improper lane change, bad accidents and injuries can happen. On the road, truck drivers can be a bit like the biggest school bully. 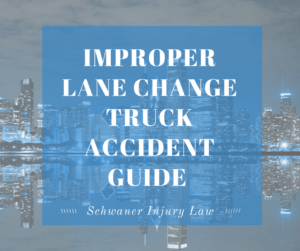 A bully, because of his size, can get away with virtually anything with his classmates, because there is usually no one around that’s bigger or tougher enough to keep him in check.

If you’re sharing the the road with a semi, that vehicle, given its immense size (an average of 80 feet including a tractor and trailer) compared to, for example, a 10-foot-long Mini Cooper, which was the king of the road when the slick little car made its debut in the movie “The Italian Job,” but would now be much less intimidating against a semi, that truck is, by nature of its sheer size, in charge of the interstate.

And if a truck driver fails to check all of his or her blind spots before changing lanes, the damage can be catastrophic. Truck accidents can result in severe brain and spinal injuries, fractures, or even wrongful death. If you were injured as the result of a truck making an improper lane change, and you reside in Illinois, contact our team so that we can get you the maximum amount you deserve. We’ll fight tooth and nail to get you a top-dollar settlement through pre-litigation. If the insurance company is stubborn or unreasonable, we will then file a lawsuit on your behalf and potentially take the case to trial.

In 2012, a Peoria truck driver shifting from the right to left lane failed to notice that there was a car traveling in the left lane, either because he didn’t satisfactorily check his blind spots or didn’t check at all, and struck the car as ge merged left, sending both the driver and the passenger to the hospital.

The driver of the truck, who initially left the scene, was ticketed for improper lane usage and driving without a valid license.

One of the biggest hazards of driving a tractor-trailer is failing to properly check blind spots on the road before changing lanes, a huge hazard given that trucks are not equipped with the ability to fully see everything surrounding them on the road.

Although the driver used his turn signal, the vehicle alongside him was too far ahead of his taillights to see that signal, and too far behind his side mirrors to be seen.

The truck driver later told police that he initially thought he had blown a tire when the accident occurred, which clearly illustrates the reason why size matters when it comes to vehicles sharing the road, because a passenger vehicle that was thrown off the road barely registered for the semi driver.

The Federal Motor Carrier Safety Administration offers the following tips to prevent accidents caused by improper lane changes, which are caused by inadequate surveillance on the part of the truck driver.

Blind spots are a big problem for truck drivers making lane changes, which is why experienced passenger drivers can prevent accidents by flashing their headlights at a truck driver that is signaling a lane change that you are aware of his or her intentions and are prepared for the move.

There are other possible reasons for lane-change accidents from trucks.