Bad Weather and Road Conditions Cause Truck Accidents and Injury

Winter weather can be a real hazard in Illinois, where snow, sleet, slush and ice can make roadways slick and treacherous for travel. 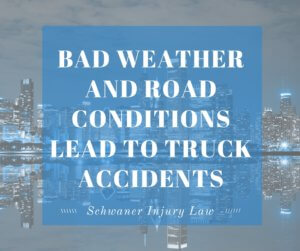 Winter conditions can be stressful for any driver, and staying in your own lane is tough enough without worrying whether other drivers can stay on the road without incident.

When sharing the road with a tractor-trailer, however, the stress levels increase considerably, especially given the size of the rig, which can crush a smaller vehicle if it should overturn or force a smaller car off the road by causing it to lose control when passing.

Why Are Semis More at Risk for Winter Accidents?

In winter, it isn’t a rarity to see a tractor-trailer jackknifed on the interstate, the contents of its trailer spilling out over the roadway. In November of 2017, a truck hit a median and crashed, spilling ethanol over the roads, which were closed until the spill could be cleaned up. Ice likely played a role in the incident. (Ref. 1)

Large, heavily-loaded semis can be especially at risk of accidents because their higher center of gravity makes them less stable than other vehicles, and more prone to both rollovers and jackknifing if they lose control on the road, which can be deadly not only for the big rig drivers, but also for anyone in the truck’s path.

What makes a semi more of a road hazard?

Some drivers may be required by their companies to pull over when weather makes travel treacherous, but others may not have weather restrictions, so drivers may stay on the roads even when conditions make driving unsafe.

Tight deadlines and the time lost by traffic slowed by winter conditions will likely keep some drivers on the road despite dangers such as black ice, snow, sleet, hail or a wintry mix, all of which can make both visibility and vehicle control more difficult.

Like all of us behind the wheel, truck drivers, no matter how experienced they are, are likely more stressed in winter weather, under pressure to deliver cargo on time without causing an accident, which can lead to fatigue, delayed reactions and other road hazards.

Drivers in a hurry may engage in risky behavior including speeding, tailgating, failure to yield or improper lane changes, all of which can cause an accident.

For a driver of a car, SUV or pickup truck, winter driving is already stressful. Sharing the road with something as large and potentially deadly as a semi, which can lose control in an instant, can up the anxiety factor considerably.

So, what can we do to stay safe?

While it is impossible not to share the road with semis, which transport goods from coast to coast year-round, there are ways to keep yourself safer during the winter months.