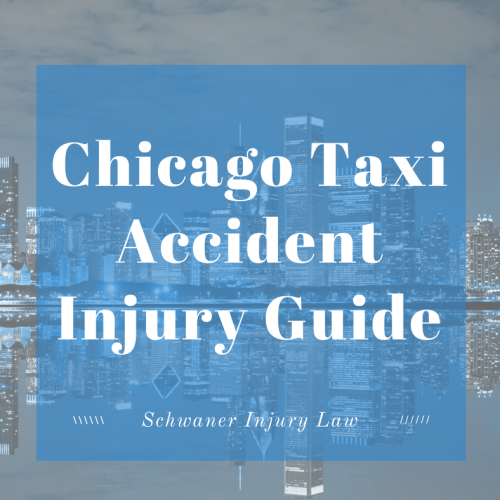 Were you injured in a cab or taxi in Chicago or Illinois? If you were, you may be entitled to compensation under Illinois law.

According to statistics, pedestrian accidents account for 11 percent of all motor vehicle accidents, and taxicab drivers have an accident rate that is four times that of normal passenger vehicles.

In 2015, a jury awarded a Chicago man more than $20 million for a 2005 accident that left the former law partner in a real estate firm with severe brain damage and unable to work. He had been headed home as a passenger in a Yellow Cab when the speeding taxi lost control on an exit, crashing into a concrete barrier.

Marc M. Jacobs, the man who won the multi-million-dollar suit, was able to sue both the cab driver who was driving recklessly as well as the company he worked for, Yellow Cab, because of the strict state and city regulations in place requiring insurance for drivers and cab owners.

Shortly after, Chicago’s Yellow Cab filed bankruptcy due to the size of the settlement.

But Jacobs, unfortunately, is not alone.

In 2012, a 31-year-old Chicago man died when he was struck and killed by a taxi driver lost control of his cab, which hit a light pole and flipped multiple times, sending Eric Kerestes into a nearby parking lot, where he was pronounced dead.

Both the cab driver and passenger were able to escape from the cab before it caught fire.

Earlier this year, the cab driver responsible for Kerestes’ death was found not guilty of reckless homicide and aggravated reckless driving.

In 1998, the same cabbie, John Kesse, injured a man when he went through a red light while behind the wheel of his cab, striking his car and damaging his femur. The man was given a $400,000 settlement from Yellow, but Kesse was allowed to keep his job. despite have more than $10,000 in unpaid tickets at the time of the incident.

That same year, a wrongful death suit was filed against a taxi driver and Yellow Cab for an accident that killed an 89-year-old woman who was in a crosswalk, according to the Chicago Tribune.

The taxi driver, according to a witness, “just plowed into her and ran her down like she wasn’t even there.”

The cab driver was charged with failing to yield to a pedestrian in a crosswalk and failure to use due care when a pedestrian in present, resulting in a $325 fine and probation. The driver had already racked up almost 70 tickets for traffic violations.

The idea of being injured in a taxi cab accident in bad enough, but what happens when no one is found liable?

And what would happen if you were riding in a taxi and got into an accident?

Were You injured by a Taxi Driver in Chicago?

There are currently about 7,000 taxis on the streets of Chicago each day, fighting against competition from driving apps such as Uber and Lyft, navigating aggressive traffic while dealing with stressed passengers in a rush to get where they’re going, whether that’s a meeting, O’Hare to catch a flight or home after a draining day at work.

Like any other method of transportation, there is always a risk factor when you get into a cab, and given the accelerated speed of most traffic in Chicago, crashes are very real possibilities, no matter the safety precautions you might take.

The most common reasons for taxi accidents include:

You’ve Had a Taxi Accident and Injury in Chicago. What Should You Do?

While taxi drivers and their vehicles are licensed and regulated by both the state of Illinois and the city of Chicago, and both drivers and cab owners are required to carry certain levels of insurance, the process of collecting compensation to cover health care costs in the event of an accident can be complex and confusing.

Because taxis are considered common carriers, they have a responsibility to keep passengers safe. If a taxi driver is negligent, resulting in any injuries, that driver can be sued for compensation. If the driver works for a cab company, however, and the accident was the result of improperly maintained equipment, the cab company would be on the hook for your expenses. In the case of Mark M. Jacobs, both the driver and the cab company were part of his suit.

If you hail a cab in Chicago, rates are fixed by the city of Chicago’s Business Affairs and Consumer Protection department.

You’ll pay a fixed rate of $3.25 for any trip, with an additional charge for every traveled mile. There are also fees for mileage, feeds for time and fees for passengers.

If you’re taking a cab from Chicago’s O’Hare Airport to the Chicago French Market, a downtown, you’ll spend an average of $56 in cab fare, not counting the tip. (Helpfully, the website points out that it would take seven hours to walk the same 17-mile trip, which was 30 minutes by cab.)

While it may seem expensive, the fees are in place to cover the costs associated with operating a cab, including insurance to cover expenses in case of an accident.

It was the Chicago Yellow Cab Company, founded in 1915, that decided to send yellow taxis to pick up fares after the University of Chicago released the results of a study on taxi safety. Researchers found that yellow with a tint of red was more visible from a distance than any other color, so Yellow Cab was born. (More than 100 years later, a three-year study from Singapore cemented that research by determining that yellow cabs were almost 10 percent less likely to be rear-ended than blue ones.)

But that’s not to say that taxi accidents and injuries don’t happen in the Windy City.

Because the legalities are complicated, it’s important to have an attorney on your side who is experienced in handling the laws that govern car accident fault, insurance and compensation for cab drivers, cab owners, and cab companies. An attorney who knows the law will ensure that all the evidence you need is available should your case go to trial, making it easier to secure a settlement that will meet all of your potential needs.