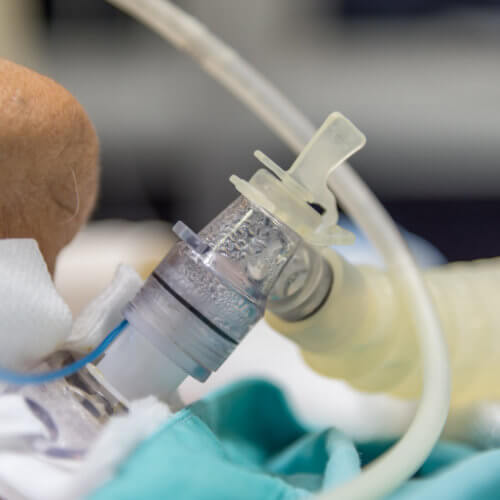 For infants who need assistance breathing after birth – those babies who suffered birth injuries or were premature, for example – may require breathing tubes to ensure that they are getting proper ventilation so they can not only survive but thrive.

In some cases, an oxygen mask, a CPAP machine (commonly used for sleep apnea) or a nasal cannula (small prongs inserted into the nose) that provide supplemental oxygen may be enough, but in other cases, a breathing tube may be required.

Intubation is an invasive procedure, and there are risk factors, especially for infants, since the process can be a complex one.

Infants require proper C02 and oxygen levels to prevent other serious health issues including cerebral palsy, hypoxic-ischemic encephalopathy, retinopathy (which can lead to childhood blindness), lung injuries and potential death, and intubation can elevate the risk factors for these complications.

Still, in an emergency situation such as respiratory distress, intubation ensures that the baby receives the oxygen it needs to survive, especially so if a baby is born prematurely and lungs are not fully developed.

Some potential problems associated with breathing tube mismanagement include:

Medical professionals can make mistakes, and personal injuries and wrongful death can happen. Having an attorney can help you get the maximum settlement for your case. If your breathing tube case cannot be settled pre-trial, a lawsuit can be filed for recovery. Suing a doctor or medical team can be costly and difficult.

Finding the right breathing tube lawyer can be the best step you can take to ensure you receive a recovery.

Breathing Tubes Malpractice and the Elderly

Infants are not the only ones at risk when a breathing tube is used.

The elderly, especially those in nursing homes, are especially vulnerable.

For them, there are a variety of different complications associated with the use of a breathing tube, especially if the aparatus is contaminated with bacteria when it is put into place.

Other problems associated with a breathing tube can include blood clots, bed sores, damage to the vocal chords and oxygen toxicity, which occurs when too much oxygen is administered into the lungs.

Because the elderly are already facing medical issues that led to the need for breathing tube ventilation, problems can be especially complicated.

According to experts, breathing tubes are usually in place for up to two weeks, except in special circumstances, and blood gases should be checked every three to four hours to ensure that there are no complications.

If your infant or loved one suffered brain damage or died as a result of breathing tube complications and you suspect medical malpractice played a role, seeking legal guidance will be one of the most important steps you take.

Please contact our law offices today, and our experienced attorney and team can help guide you through the complex legal landscape that is medical malpractice.

We will approach your case with the care and compassion you deserve, and you won’t be charged until we win your case in court.

“A real class act with your best interest at heart!”

“Working with David was a pleasure. From the first time I spoke to him I felt at ease with him as he seemed more concerned with my well-being before all. He was always keeping me updated on everything every step through the process and was always available for me if I had a question. David delivered more than expected for me in every way and I would recommend him to anyone. A real class act with your best interest at heart!”