A Wal-Mart truck driver who rear-ended former “Saturday Night Live” cast member Tracy Morgan’s limo van in 2014, killing one person, hadn’t slept for 28 hours, according to the National Transportation Safety Board. The man had driven for 12 hours before starting a 14-hour shift(1). 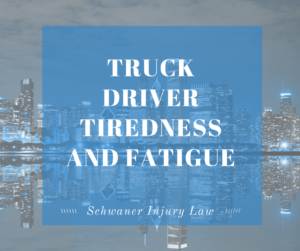 Tracy Morgan – a Chicago fan, told Chicago Sun-Times reporter Bill Zwecker in 2017, “I just had a session with my psychiatrist, who reminded me of something. He said, ‘The two biggest and most infamous car crashes in history were yours — and Princess Diana’s. But you lived.” Morgan was in a coma, and his team of doctors did not expect him to make a full recovery. He suffered broken bones and brain damage before receiving a settlement from Wal-Mart for their part of the truck driver’s negligence. After a grueling three-year recover from a traumatic brain injury, Morgan is making a comeback.

The truck driver responsible for the accident had been awake for more than 24 hours, and his reflexes were so slow that when he neared a construction zone and the speed limit reduced to 45 mph, he failed to slow down or brake in time to prevent hitting the vehicle in front of him, despite signage warning him of the upcoming construction. Because of his speed, he was unable to stop in time to prevent hitting the luxury van. If he had slowed down and braked when he saw Morgan’s limo van, experts have said the truck accident would not have happened, and the wrongful death other sever injury would have been avoided.

Driving for long periods of time is dangerous for any driver, and can make it more difficult to focus on the road, react quickly enough to avoid road hazards and stay awake behind the wheel.

According to the Federal Motor Carrier Safety Administration, almost 13 percent of truck accidents are caused by fatigued drivers, whose reaction times can be equal to driving drunk after less than five hours of sleep.(2)

The longer a driver goes without sleep, the more dangerous a road hazard they become. The driver who struck Morgan’s limo van had missed an entire night’s sleep, and had been charged with vehicular homicide and assault by automobile. He initially pleaded not guilty, but in 2016 changed his plea. In 2015, although Wal-Mart initially said they were not responsible for the crash, they settled with both McNair’s estate and Morgan. They also later amended their employment regulations so that drivers must live within 250 miles from the place where their shift begins.

When the driver who struck Tracy Morgan’s limo van did so, he had been driving almost twice the legal limit based on federal regulations.

While deadlines, road delays and other issues can keep a driver behind the wheel long before he or she should be, federal limits how long drivers can be on the road due to the dangers of driving fatigued.

Truckers are allowed a maximum of 11 hours behind the wheel during a 14-hour work day, which allows time off for dropping off and picking up loads.

The time of rest required between driving is a minimum of 10 hours.

Truck drivers are required to carry log books to chart their time behind the wheel. They are checked at weight stations and during traffic stops. Many drivers, however, carry two sets of books – one for legal purposes, the other for their company to prove the actual time they spent working.

While the driver in Morgan’s accident was not technically working while on his way to work, he was behind the wheel en route to work, which applied to his work day and made him less safe on the road.

Experts recommend a few tips to prevent fatigue from turning a truck into a deadly over-the-road hazard.
They include:

Were you or a loved one part of a truck accident caused by driver fatigue? Did you or a family member suffer severe injury?  Contact our team today to get the compensation you deserve for your or your loved ones injury.

Chicago Delayed Birth Injury Cases – When is a Doctor at Fault?
Schedule a Chat