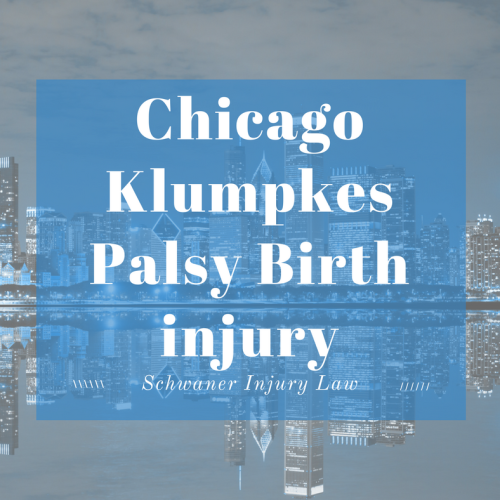 Klumpke’s Palsy Birth Injury Guide and Information for Chicago, IL. For parents, the birth of a child is one of the most important moments of their lives.

A successful birth, however, often rests in the hands of the physician tasked with delivery, and sometimes, mistakes happen that are devastating.

One rare but debilitating birth injury is Klumpke’s palsy, an injury of the brachial plexus nerves, a bundle of nerves that runs from the spine through the neck and into the arm that controls movement of the arms, hands and fingers.

Like Erb’s palsy, Klumpke’s palsy is a complication of shoulder dystocia, which occurs when the baby’s shoulders become trapped against the pubic bone because they are too large to pass through the birth canal.

While there are maneuvers a physician can perform to lessen the risk of traumatic injury, those maneuvers are often neglected, which can cause the brachial plexus nerves to stretch, rupture or pull away from the spine completely.

Klumpke’s palsy – also known as Dejerine-Klumpke palsy – refers to injuries that impact the muscles of the forearm and hand, caused by damage to the lower brachial plexus.

Infants with Klumpke’s palsy can experience a range of different injury levels, ranging from weakened muscles of the forearm, wrist, hand and fingers to complete paralysis in the area. They can also develop a drooping eyelid on the side of the face opposite from the brachial plexus injury, which is known as Horner’s syndrome.

The most common symptom of Klumpke’s palsy is “claw hand,” which is a tightening of the wrist and fingers while the forearm lies flat.

Klumpke’s palsy, like other brachial plexus injuries, is usually the result of a baby with a high birth weight being born to a small mother and experiencing difficulty passing through the birth canal.

A rough extraction, whether manual or with the use of assisted birthing devices such as forceps or a vacuum extractor, can damage the lower brachial plexus nerves, leading to Klumpke’s palsy.

There are four different types of injuries associated with the brachial plexus, including:

Because Klumpke’s palsy impacts only the lower nerves of the brachial plexus, it is often the result of neuropraxia.

That means that in most cases, a full recovery is possible.

According to statistics from the National Institute of Neural Disorders and Stroke, most babies that develop neuropraxia-related Klumpke’s palsy make a full recovery, usually without medical intervention.

More serious injuries, such as neuroma or rupture of the lower brachial plexus nerves can lead to lifelong disabilities.

While treatment for Klumpke’s palsy depends entirely on the severity of the injury, physical and occupational therapy can often help restore some range of motion and mobility in cases of severe stretching, while surgery to either remove scar tissue or graft nerves has the potential to restore some mobility and range of motion.

Still, Klumpke’s palsy injuries typically don’t respond as well to physical therapy as other brachial plexus injuries, meaning that in severe cases, the injuries are likely to last a lifetime.

Klumpke’s palsy can be predicted and the risk of the injury significantly reduced if doctors consider the following risk factors:

If risk factors are present, a Cesarean section is often the best way to prevent Klumpke’s palsy.

What Should I Do If My Child Develops Klumpke’s Palsy?

If your child loses mobility and sensation to the forearm, wrist, hand or fingers as a result of an injury to the lower brachial plexus nerve bundle, resulting in Klumpke’s palsy, it’s vital that you seek out the advice of an experienced attorney.

Because Klumpke’s palsy is most often the result of a medical mistake – doctors either overlook risk factors, disregard ultrasounds showing that the baby is likely to be larger than normal or are too aggressive during the delivery process – you may be able to collect damages due to medical negligence.

Because severe cases of Klumpke’s palsy will require lifelong care and will diminish your child’s earning capacity, it’s important to find an attorney with experience in medical malpractice law and brachial plexus injuries.

A settlement will require compensation to cover physical and occupational therapy, surgery, pain and suffering and more, and the right Chicago-based attorney can make that happen.

That will allow you to get back to the business of helping your baby find the most appropriate care available to treat his or her birth injury.