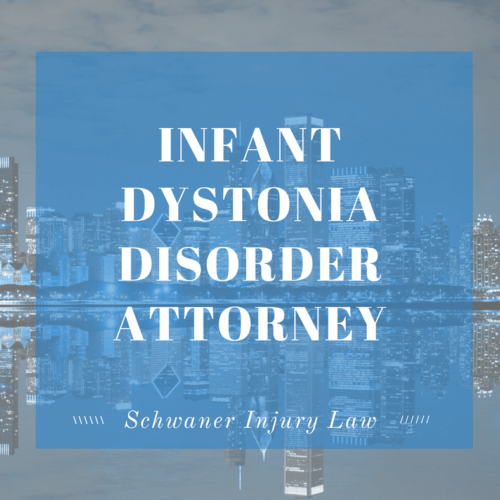 There are many birth injuries that can lead to impaired motor function, including dystonia disorder.

It manifests itself with slow, writhing, involuntary movements or twisting as muscles move against each other. It can cause distorted postures, and symptoms can range from mild to severe enough to interfere with the performance of tasks including tying shoes, writing and getting dressed, among other things. Some symptoms can be controlled by medications, but in severe cases, lifelong complications are possible.

There are several different types of dystonia disorder, which causes the muscles in body parts impacted by the disorder to twist or move in a painful manner.

The different types include:

While distorted posture or repetitive movements triggered by involuntary muscle contractions are the most common symptoms associated with dystonia disorder, they are not the only ones.

Dystonia can also lead to difficulty using the hands or maintaining a grip, which makes eating, brushing one’s teeth, writing and other tasks difficult, and difficulty controlling the muscles of the mouth and tongue, which can also impact eating as well as communication skills.

During times of stress, symptoms generally tend to worsen, and contractions become more obvious and occur at more regular intervals.

In most cases, dystonia disorder is linked to birth injuries that cause a lack of oxygen to the brain, killing off brain cells in the region of the brain that controls motor function, or an injury that causes hemorrhaging of the brain.

Hemorrhaging, which can be the result of the improper use of assisted birthing devices including forceps or vacuum extractors, can cause pressure to the brain when blood becomes trapped between the skull and brain, leading to brain damage.

Injuries that alter the communication pathways of nerve cells, infant stroke, brain tumors, a traumatic brain injury, oxygen deprivation caused by problems with the placenta or umbilical cord or a reaction to medication can also cause dystonia. In some cases, the disorder is genetically linked, and can be inherited.

How is Dystonia Disorder Treated?

While there is no cure for dystonia, there are some treatment options that may relieve symptoms enough so that symptoms are controlled.

Physical therapy can control some spasms, especially those related to task-specific dystonia, and speech therapy can help improve communication skills. Too, because some types of dystonia tend to worsen later in the day, when levels of dopamine are depleted, medications that can replenishing lost stores of dopamine can ease symptoms, in some cases completely. (Ref. 1)

Injections of the botulinum toxin (the toxin related to botulism) can prevent the release of a certain neurotransmitter, causing flaccid paralysis that can control spasms.

In some cases, deep brain stimulation – the implantation of a device that acts similarly to a pacemaker, and sends messages to the areas of the brain that control movement, potentially easing spasms – or surgery are suggested.

While some cases of dystonia disorder are genetic in nature, others are the result of birth injuries that are caused by negligence on the part of medical professionals who failed to prevent brain hemorrhaging or a lack of oxygen to the brain at some point during delivery.

Dystonia can be debilitating and can impact a child’s life significantly, making communication, learning and other activities difficult. The costs of therapy and other treatments can also be costly, even if you have a good insurance plan.

If your child developed a form of dystonia disorder due to a birth injury, an injury attorney can help you recover damages resulting from the injury.

While financial compensation will not restore your child’s physical health, it will help you provide the necessary medical care to help improve his or her quality of life.