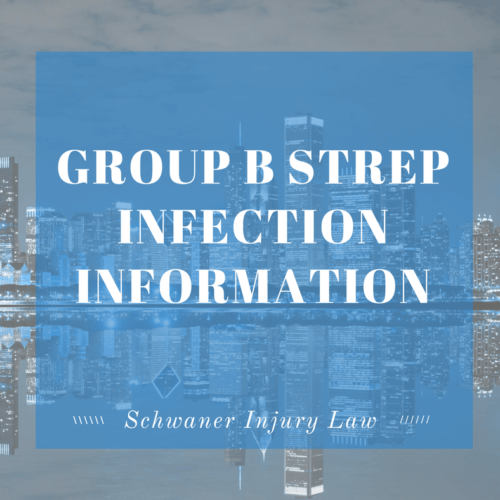 Group B step infection impacts approximately 1 in every 2,000 babies born in the U.S. each year, making it the most common cause of both blood and brain infections in newborns.

The bacteria, is most often found in the vagina or anus of pregnant women, although it is not considered a sexually transmitted disease, and can be passed on to newborns when they are delivered vaginally.

Because group B strep can travel to the baby’s organs and brain once in the bloodstream, it could lead to a wide range of problems including developmental delays, pneumonia, seizures, and hearing and/or sight impairments. Children who are born to mothers infected with group B strep are also at a higher risk of stillbirth.

Why is Group B Strep So Serious?

According to the Centers for Disease Control and Prevention, strep bacteria, which infects one in four women, although most do not know, grows very quickly, so antibiotics administered prior to labor will not prevent transmission of the infection from mother to baby. (Ref. 1)

Symptoms of a group B strep infection, which usually present themselves between the first 24 hours and the first week following birth, include lethargy, an irregular heartbeat, bluish-tinted skin, as well as those symptoms specifically related to septicemia or meningitis.

The infection is hardy and dangerous, because both septicemia and meningitis can cause a wide range of complications, including death.

Neonatal septicemia, also known as neonatal sepsis, is one of the leading causes of death in newborns, and may include the following symptoms:

Babies that are diagnosed with septicemia can be treated with antibiotics, fluids and oxygen therapy. Cases that go untreated or are not diagnosed promptly could lead to disability or death.

Neonatal meningitis, an inflammation of the membranes that protect the central nervous system including the brain and spinal cord, is also potentially fatal if not treated promptly. Symptoms include:

Meningitis is diagnosed with a lumbar puncture. If it is not treated promptly, it can lead to cerebral palsy, which generally causes problems with motor function, cognitive disabilities, and loss of sight or hearing.

According to the CDC, the two most effective ways to prevent potentially dangerous group B strep infections in infants is to test all pregnant women for the infection during the late stages of pregnancy and giving women who test positive for the virus antibiotics during labor.

Because the infection can sometimes be dormant and there are generally no symptoms of the bacteria, it is important to be screened for the group B strep between 35 to 37 weeks of pregnancy to be more certain that the bacteria won’t be passed on to the infant during delivery.

If Your Baby Contracts Group B Strep…

Because group B strep is life-threatening to newborns who contract the infection, a doctor who fails to test for the relatively common bacteria or who fails to administer antibiotics if risk factors are present would be considered negligent.

If your doctor failed to test for Group B strep and your baby developed meningitis or septicemia as a result, you could be eligible for compensation due to negligence on the part of your health care provider.

A competent injury attorney can help you file a medical malpractice lawsuit in order to be compensated for the costs associated for caring for your child.

While we understand that no financial damages will make up for the injury or death of your child, we also know that being able to focus on your child’s care instead of your finances will make it easier to seek out the best treatments for your child, improving his or her quality of life.

UberXL Injury In Chicago? If You Were Hurt In a UberXL in Chicago You May Be...
Schedule a Chat