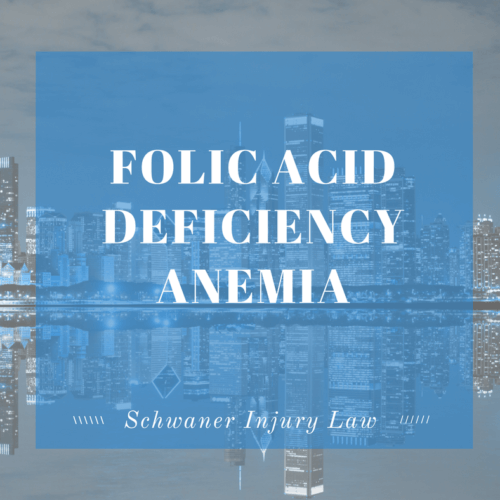 Folic acid remains the most important nutrient that a pregnant woman can take in to ensure the health of her baby.

When women don’t take in enough folic acid, they run the risk of developing folic acid deficiency anemia, a condition that can spread to a growing infant, causing serious birth defects.

While the condition can be avoided – and it is becoming less common with better access to folic acid-dense foods – avoidance hinges on whether or not women were informed of the need to take in folic acid throughout their pregnancies.

What is Folic Acid?

Folic acid – which in some recent studies has been studied as a preventative for autism (Ref. 1) – is a B vitamin also known as folate. Folic acid helps the body make new cells, and women who don’t get enough of the nutrient in their diets run the risk of their babies developing birth defects of the brain or spine.

Anemia is also a risk factor for pregnant women who aren’t getting enough folic acid in their diets or were not advised to supplement by their doctors.

If anemia is left untreated, it can cause a host of medical problems not only for the mother, but also her baby.

What Is Folate Deficiency?

Folate deficiency happens when women don’t take in enough folic acid, a nutrient that needs to be replenished daily since it is not stored in the body.

Because folic acid helps the body make new cells, it plays a role in the formation of blood cells. Folic acid deficiency anemia develops when there is either not enough hemoglobin in red blood cells, or the body is not making enough red blood cells.

Because folic acid is vital to infant health, during pregnancy, available folic acid is first sent in support the infant as it grows, and if there is not enough left over, it could lead to deficiencies for the mother.

Morning sickness can lead to folic acid deficiency, because few nutrients are taken in due to regular vomiting.

In addition to anemia, folic acid deficiency has been linked to Crohn’s disease, celiac disease, thalassemia, a blood disorder that requires regular transfusions because the body doesn’t produce enough blood cells, and sickle cell anemia, a blood disorder in which there are not enough red blood cells available to transport oxygen throughout the body, and those blood cells that are available are deformed and prone to blocking blood vessels, causing a host of serious health problems.

How Much Folic Acid Do I Need?

What Are the Symptoms of Folic Acid Deficiency Anemia?

There are several clues that will let you know if you’re experiencing anemia, including:

Folic acid deficiency anemia is important to treat because if a mother experiences symptoms, so will her baby.

Risk factors for an infant born with anemia due to a folic acid deficiency include a low birth weight, premature birth, neural tube defects including spina bifida, damage to the nervous system, brain damage caused by either a partially formed brain or the accumulation of fluid on the brain, and stillbirth. Other birth defects associated with an inadequate intake of folic acid include heart defects as well as cleft lips and palates.

If your doctor failed to inform you of the importance of folic acid, he or she could be considered negligent and responsible for damages in your case.

Because a doctor may initially deny neglecting this important bit of information, your medical records will likely indicate whether or not folic acid was discussed during prenatal appointments.

In order to determine what caused your child’s folic acid deficiency anemia and the resulting injuries, its important to talk to an experienced injury attorney to determine whether or not your medical care played a role in the birth injury.

If you discussed pregnancy planning with your doctor, he or she should have recommended folic acid supplements at that point to prevent a host of preventable birth injuries including anemia.

If that didn’t happen, an experienced attorney will be able to hire medical experts to support your case while preparing to either negotiate with an insurance company or argue your case in front of a jury in an effort to ensure that you are compensated for your child’s injuries and are able to cover the expenses associated with his or her care.