If you were injured in an accident involving a tractor-trailer, you will need to learn more about the complexities surrounding truck accident law if you intend to file a lawsuit in your case.

A specific category of vehicle accident law, truck accident law looks at the liability surrounding a truck driver and his or her trucking company based on the rules and regulations of the Department of Transportation and the Federal Motor Carrier Safety Administration.

It most often covers personal injuries sustained by those in a passenger vehicle as a result of a collision with a commercial truck, which can be catastrophic given the overwhelming size differences between semis and passenger cars.

While a study from the University of Michigan Transportation Research Institute (Ref. 1) found that passenger vehicles were to blame for accidents in just over 80 percent of crashes between semis and smaller vehicles, there are other factors that determine liability in an accident.

Drivers of passenger vehicles often make the mistake of traveling too close – if you can’t see a truck driver’s side mirrors, he or she can’t see you – and cars can also put themselves at risk by passing semis under risky conditions or stopping too fast in front of a truck, which may not allow the heavier vehicle to come to a stop safely.

Commercial vehicles weigh as much as 125,000 pounds compared to a passenger car’s average weight of 4,000 pounds, so they come to a stop more slowly, even if truck drivers are alert and aware of slowed traffic ahead.

Unfortunately, truck drivers are often on the road for long periods of time, putting them at risk of fatigue, one of the main causes of truck accidents in the United States, because it can slow reflexes and cause drivers to make potentially deadly mistakes that they wouldn’t if they were more rested.

Truck accident law covers personal injuries that are sustained by those in a passenger vehicle caused by a collision with a commercial truck. Attorneys address liability and negligence on the part of the truck driver, using regulations from the Department of Transportation as well as the Federal Motor Carrier Safety Administration, traffic laws, and civil liability laws as a guide.

Tractor-trailers are held to rigorous standards on the road, and vehicles must pass inspections in order to legally haul commercial freight.

After an accident, truck accident lawyers will gather evidence include police reports, witness statements and black box recordings to determine the cause of an accident, which could have been the result of faulty equipment or other truck-related liability that would put the driver or his or her company at fault. 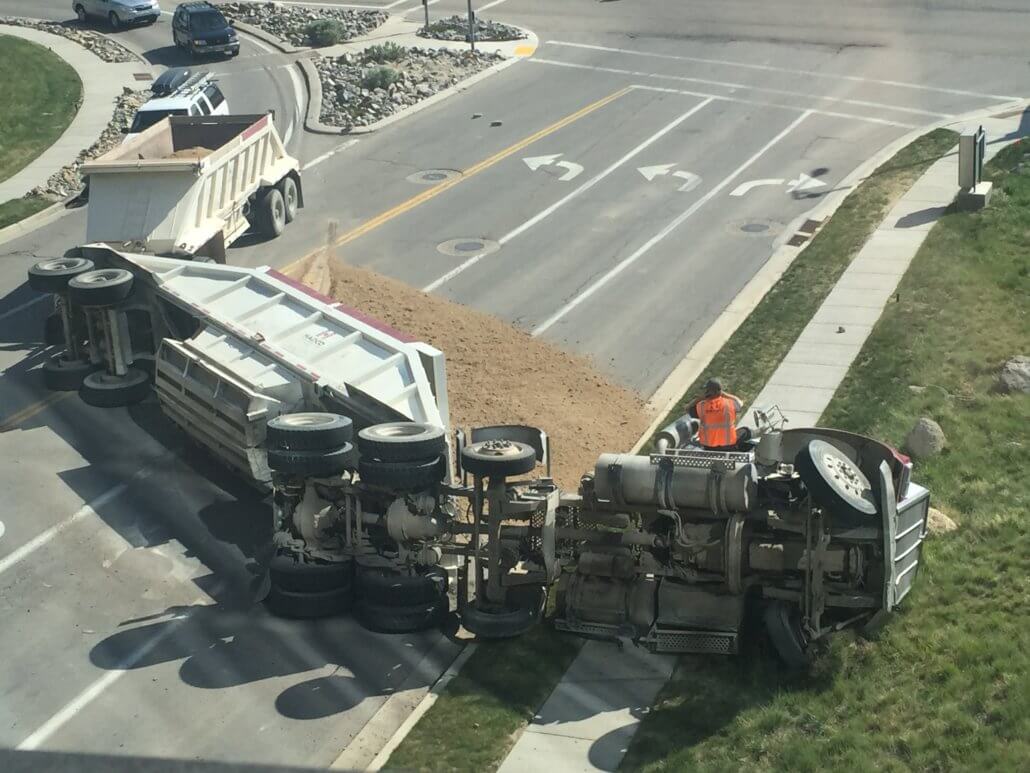 Truck accident lawyers commonly see certain types of accidents more than others, including those related to driver fatigue.

Drivers are encouraged to deliver freight as quickly as possible, and the financial incentives associated with getting a load to its destination in a timely manner can put the safety of other drivers on the road at a lower priority.

In addition to fatigue, some other common accident causes include:

Because there are many potential defendants in a truck accident law case, lawyers must identify everyone who is potentially responsible for an accident, including the driver, the trucking company, the truck manufacturer, those in charge of maintenance, tire manufacturers, or a shipping company.

The plaintiff in a truck accident lawsuit must also establish liability, based on evidence gathered in the case proving negligence.

For example, a 12-car crash outside of Chicago in 2015 that left numerous people injured was caused when a semi driver fell asleep behind the wheel and failed to stop in a construction zone, triggering the pileup.

The driver was charged in the incident.

While drivers are most often identified as defendants, if a trucking company knowingly allowed a driver to rig log books or hired a driver with a history of substance abuse that was later involved in a DUI, for example, the trucking company could also be held liable.

Truck accident lawyers must also prove damages, through the use of expert witnesses such as physicians who can prove the physical injuries sustained in an accident, an economist who can potentially help prove loss of income and earning capacity and psychologists who can offer insight into the emotional damages associated with an accident.

While some cases may be settled out of court, others go before a jury, requiring truck accident lawyers to have experience both in negotiations with insurance companies and before a jury in a court of law.