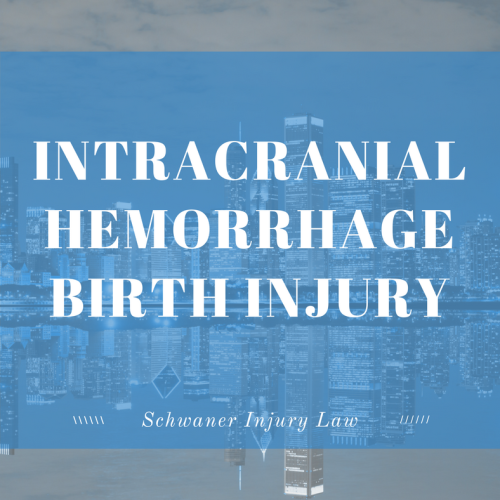 Intracranial hemorrhages are a type of traumatic birth injury that can range from minor to extremely severe, and they are often caused by medical negligence including the misuse of assisted birthing devices including forceps and vacuum extractors, mistakes that lead to oxygen deprivation, the improper use of force during a complicated delivery or trauma during delivery.

Early diagnosis is vital because bleeding of the brain can cause serious injuries including brain damage, impaired motor function, and developmental disabilities.

There are a wide range of different types of intracranial hemorrhages that an infant can experience due to a traumatic birth, ranging in severity from brain bleeds that resolve themselves with no side effects to those that can cause serious, lasting disability due to the impact of rapid bleeding within the brain.

Complications That Can Cause Intracranial Hemorrhage Birth Injury Lawsuits

While not all cases of intracranial hemorrhage are caused by medical mistakes, most brain bleeds occur during labor and delivery.

In many cases where a birth injury is possible, a cesarean section is scheduled. If, however, a doctor or other medical staff ignore or fail to monitor the fetus for size and weight estimates or signs of fetal distress and fail to schedule a C-section to avoid complications, they would likely be held liable for any birth injuries your child experienced, including intracranial hemorrhage.

How Do I Know if My Baby Suffered an Intracranial Hemorrhage and Should Contact a Birth Injury Attorney?

How Is an Intracranial Hemorrhage Treated?

In order to determine where a hemorrhage is occurring, brain imaging scans – either an MRI or a CT scan or in some cases, an ultrasonography – will be scheduled to better map the brain and pinpoint where a bleed is to determine whether or not any intervention is possible.

In some cases, neurosurgery will be scheduled to manage subdural hematomas, depending on the severity and the location of the bleeding.

What Are the Potential Outcomes of Intracranial Hemorrhage Birth Injury?

While some intracranial bleeds do not cause lasting problems, in some cases, both mental and physical impairments are possible.

Therapy can help families learn to live with such conditions.

Your initial consultation is free, and you won’t pay any fees unless we settle your case.