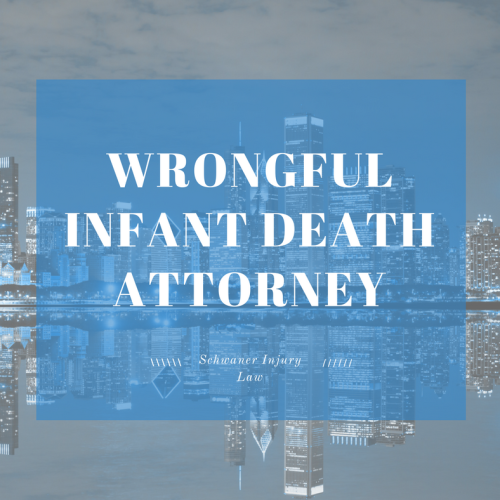 Infant Wrongful Death Injury Attorney in Chicago, IL. For an expectant parent, there can be nothing worse than experiencing the unexpected loss of a baby, especially if that death is the result of negligence on the part of medical professionals trusted to ensure the healthy birth of your baby.

There are many things that can occur during childbirth that lead to the death of a child, and while some are unexplainable, others are the result of medical error or birth injury malpractice.

In 2012, an Illinois couple lost their month-old infant son, who was born four months premature and weighed less than two pounds, when he was given a deadly level of sodium after a pharmacy technician filled the prescription in error. After baby Genesis died, the hospital attempted to cover up the incident, first by changing the label on the IV bag to show that the correct dose was given, then by failing to comply with orders for a second blood test after the first showed high levels of sodium that doctors initially thought was an error.

The couple was awarded $8.3 million in damages as a result of a medical malpractice lawsuit against the hospital.
While the settlement doesn’t bring back their son, is does bring an element of justice for their son’s short life, and puts hospital staff on notice to be more vigilant about the precious lives they hold in their hands.

In addition to drug mistakes, there are other medical errors that can lead to the death of a baby during or shortly following childbirth.

Oxygen deprivation can cause brain damage that leaves a child with long-term injuries that will last a lifetime, but if a baby is deprived of oxygen for too long, it can be fatal. It’s important for obstetricians and nursing staff to be trained to notice signs that a baby may not be getting enough oxygen, either because the umbilical cord might be wrapped around the baby’s neck during delivery, the stress of labor is putting pressure on the umbilical cord that cuts off oxygen flow or the placenta has pulled away from the wall of the uterus, cutting off access to all nutrients.

Blood carries oxygen and other vital nutrients to the baby’s brain and other developing organs. When blood flow is restricted, which can occur if the mother develops an infection such as preeclampsia, which elevates maternal blood pressure so high that blood is diverted away from the baby, organs can shut down, leading to fetal death. (Preeclampsia can also lead to low body temperature, low blood sugar and premature labor, all of which can also be deadly.) Problems with the placenta can also restrict blood flow – and therefore oxygen – to the fetus, which can cause wrongful infant death. If medical professionals fail to notice either preeclampsia or placenta issues, they could be held liable for the baby’s death.

There are numerous reasons why a delivery can leave a baby in distress, especially if an obstetrician or other medical professional is not prepared for the problem they encounter.

In some cases, a baby is too large to fit through the birth canal, creating the need for an emergency Cesarean section, which can be fatal if done improperly.

Sometimes, negligence can also occur if an inexperienced or nervous physician is required to use a vacuum extraction device or forceps to deliver a baby in an emergency situation. Both are risky for delicate infants, and when used incorrectly can lead to permanent injury or death. Both can cause brain hemorrhaging, which can lead to fatal swelling of the brain if it goes unnoticed.

In 2014, a baby died five days after delivery when forceps were used too forcefully during her delivery, crushing her skull. The mother had previously requested a Cesarean section because of the size of baby Olivia, but her doctor refused.
The birth was so traumatic, said the child’s grandmother, Angie Coats of Houston, that the doctor put his foot on the bed to give him extra strength while using the forceps. She added that when the doctor placed the forceps on the top and side of Olivia’s skull, “we heard a pop,” Coats said in an interview with ABC, describing it like the sound of broken pottery, which they realized was the sound of the baby’s skull being crushed.

There are several reasons why bleeding during pregnancy can lead to the wrongful death of an infant.

Placenta Previa. When the placenta is located near the top of the cervix, it can lead to bleeding, especially when a pregnancy reaches its seventh month. While rare, placenta previa requires bed rest to prevent premature birth, and if the condition goes unnoticed, it can lead to infant wrongful death.
Placental Abruption. During birth, the placenta can separate from the uterine wall prematurely, cutting off both oxygen and blood flow to the baby. About 15 percent of all fetal deaths during labor are the result of placental abruption.
Uterine Rupture. There are several reasons that the uterine wall can rupture during delivery, and it puts both mother and baby at risk of death. It is most common when the mother has uterine scars from previous surgeries such as a cesarean section, which can make natural childbirth riskier, or if there is excessive pushing on the mother’s stomach during labor to assist in delivery. Both can result in medical malpractice suits.

There are several different types of damages associated with fetal death malpractice that is the result of doctor or hospital negligence.

In most medical malpractice lawsuits associated with fetal deaths, damages are usually noneconomic, and there are a variety of factors that will determine how much of a settlement a judge or jury will award.